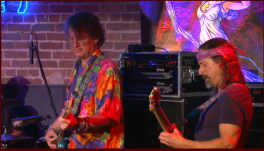 According to Moonalice legend, Prairie Prince's Big Kids Rock Band opened the show. The walls of George's were covered with a selection of Prairie's fine art paintings and Chubby interviewed Prairie and three collaborators after the opening set. Once again, art and music combined to make something special at George's in San Rafael.

According to Moonalice legend, to tonight's poster by Ron Donovan depicts Moonalice de Milo, the patron saint of bountiful harvests. With her 20 arms, Moonalice de Milo was not only a prodigious cultivator of hemp, but also a trail blazing roller of spliffs! Best of all, she never had a problem getting her doobies lit, as her many hands could protect a Bic lighter in winds up to and including a Class 4 hurricane.

We dedicated the encore to our friend Tracy Sheridan, who is battling an extremely virulent form of Lyme Disease. 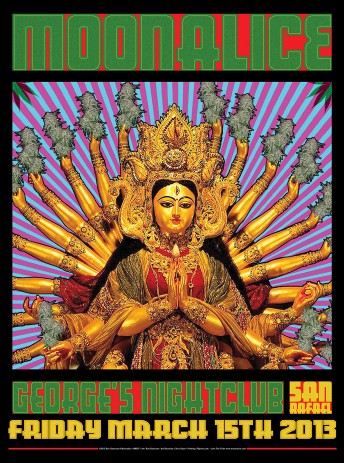