According to Moonalice legend, legalization in the state just north of here has had a big impact on our tribe, especially among tribal nobility. Now that any adult in Washington can get high, a few members of our tribe here in Eugene are determined to get higher. Foremost among these is Queen Cozmic of the Evergreens. As tonight's poster by Chris Shaw indicates, Queen Cozmic has some extra sizzle under her skirts, in the form of the first cannabis-fueled personal rocket ship. Early testing has gone very well. At last report, Queen Cozmic was about halfway between Eugene and the dark side of the moon. This flight is just the beginning. Next year, Queen Cozmic plans a flight to Pluto that will prove once and for all that Pluto is a planet, not a cartoon dog.

You were all awesome along with The Garcia Birthday Band @ the Wonder Ballroom in Portland, and here in Eugene via Couch Tour @ the Cozmic! Thanks for the song dedication to Constance...she will always be my brightest star. 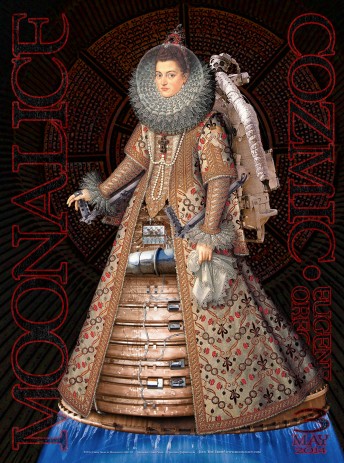