According to Moonalice legend, today is Halloween ... a festival that Wikipedia says traces its roots to a "Celtic harvest festival with possible pagan roots". As depicted in tonight's poster by Darrin Brenner, the Moonalice version of Halloween is definitely a harvest festival, but the roots are cannabis, not pagan. Pagan is too harsh and it doesn't get you high. Moonalice legend tells the tale of Cubensis Moonalice, who tricked and treated with her pet whenwolf, 4:20. Cubensis had many talents, but she was best known for her ability to play Dead, which came in particularly handy on Halloween.

Note: Jason Crosby played keyboards, bass, and fiddle on Live A Little (That's Right), then Keep on Growin' through Tell Me It's Okay.

My first Moonalice show, attended with my wife (in US Blues costume) simply amazing. I will attempt to see every show I can from this point forward. Nice :-) 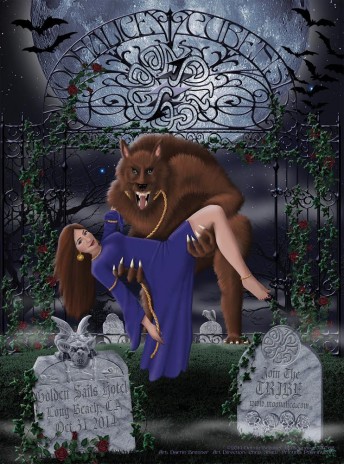