According to Moonalice legend, the presidential election cycle has already begun. The World Clown Association has already registered its displeasure that some people have referred to its transport system when describing the candidates from the Republican Party. Now the Society of Great Apes are suing the human race to prevent us from claiming to be descended from apes. They believe this claim causes irreparable harm to the reputation of Great Apes. As depicted in tonight’s poster by George and Patricia Sargent, the Society of Great Apes has extended an olive branch to the Moonalice tribe, perceiving that we are sensitive enough to appreciate their plight. We explained that when our tribe goes bowling, it’s with a pipe filled with weed. The Great Apes said they are ready to give our kind of bowling a try. Any volunteers? 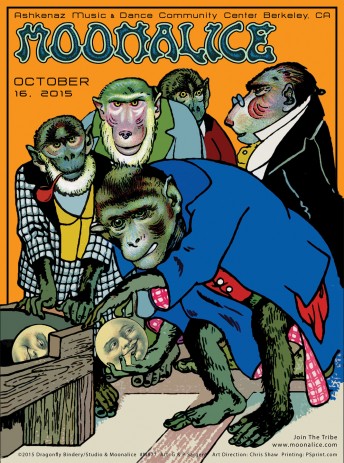