According to Moonalice legend, the insanity continues, but the good guys are beginning to make inroads. This is our first gig since the midterms, since more than 100 women were elected to Congress, including the first two Native American women, the first two Islamic women, the first black woman from Massachusetts and the mother of a boy killed by gun violence. Turnout was fantastic and favored the good guys by huge margins nationwide. Tonight’s poster by Alexandra Fischer depicts Sir Topem Moonalice, the wise owl of Berkeley. He wants us to know that each of us has a role to play. If we stick together, we can take things to a better place. We are thankful for all of you. 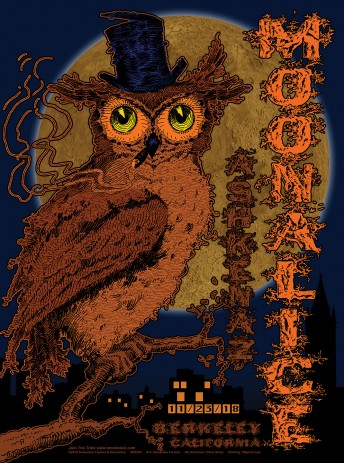