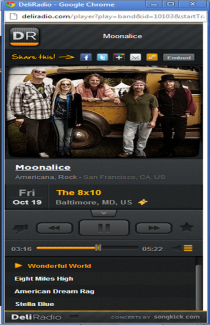 Moonalice founder, singer, song writer and guitarist, Roger McNamee, talks to DeliRadio about why the band has chosen to chart such new directions, and where it's going next.

DR: Why is art and concert posters such an important facet to your group and how do you select your artists?

RM: Art has been with Moonalice from the very beginning. These posters are as much Moonalice as the music. From our very first show in 2007 we have distributed a unique poster to fans at every gig. We do this because poster art is beautiful and our artist friends need the work.

We have a stable of about 20 artists and create a unique poster for each show. Moonalice artists include the best rock poster artists from the Bay area and beyond. So far more than 500 posters have been created and these have been exhibited at three “Art of Moonalice” shows, one in New York as well as two in the Bay area.

The next "Art of Moonalice" show will be at the Brooklyn Bowl in NYC (listen to Brooklyn Bowl concert calendar here) on Sunday October 28 at 3:00 p.m. The event will feature the full series of the band’s iconic rock posters designed by noted artists including Wes Wilson, Stan­ley Mouse, Chris Shaw, David Singer, Chuck Sperry, Ron Donovan, Wendy Wright, Dave Hunter, Alexan­dra Fis­cher, Den­nis Loren, Lee Conklin, Lauren Yurkovich, John Mavroudis, John Seabury, Carolyn Ferris, Dennis Larkins and Darrin Brenner. Many of the artists will be in attendance and will be available to sign posters. Entrance is free and the art show will be followed by a concert at about 7:00pm. It’s a great family fun way to spend a Sunday afternoon and evening!

DR: Moonalice has also put a heavy emphasis on embracing social media (Twittercasting shows, for instance). What made you want to step into that role and what would you say it’s done for the group’s appeal and career?

RM: Moonalice is a social experiment that blends music, art, photography and fun in a manner that was common forty years ago, but not so much now. We are pioneering a new model of fan engagement which depends on social media like Facebook, Twitter and Google+, and even Linkedin. We have more than 130,000 fans and followers on these networks. Real life can nowadays be a pretty grim affair. In that environment, Moonalice on social media offers an emotional oasis of the best poster art on earth combined with beautiful photography and other fun, weird, wacky and wonderful stuff. As for the legends, well, they are legendary!

Our social media experiments have been really fun: Twittercasts, Twitter Radio and the Moonalice Forum. One of our favorite innovations in 2010 was MoonaliceTV which enabled us to broadcast most of our shows live and to share nearly all the others.

MoonaliceTV has now evolved into MoonTunes®, our own HTML 5 player for iPhone / iPad / Android that allows our fans to access live video streaming of shows which we upload via our own satellite system, a 160+ show video archive, a 450+ show audio archive, and 500+ posters, all for free! We have just upgraded to a new high capacity satellite with a 10 MB uplink, which doubles quality to full HD video!

Our signature single, "It's 4:20 Somewhere" is heading for two and a half million downloads! Last month the Rock and Roll Hall of Fame announced that the digital logs for “It’s 4:20 Somewhere” had been acquired for the Library and Archives. Our logs will help tell the story of music’s digital revolution; specifically the rise of direct-from-artist (DFA) distribution. We are the first band without a label to achieve one million downloads of a song from its own servers, direct-from-artist. Over the next several months, the Rock and Roll Hall of Fame Library and Archives will complete its digital asset management system in order to handle all digital formats, from electronic documents to born-digital photographs, audio and video files. Upon completion, Moonalice’s digital logs will be available for use at the Library and Archives through the online catalog.

Ever since the beginning of pop music, technology has enabled artists to change the world, whether it was the introduction of LP records, stereo sound or subwoofers. Today we have the iPhone, the iPad, Android smartphones and social networks that allow artists to create and distribute a wide variety of music-related products on their own. At no other time in the history of music have the creative opportunities offered by technology afforded artists such a bounty of innovative ways to explore their craft and share their music.

DR: On the other hand, why should someone come to one of your shows if they can just stay home and watch it online instead?

RM: We have a global fan base and it is not always physically possible for our fans to attend our shows. Thanks to MoonTunes® they can either watch or join other fans in the chat room on what we call the Couch Tour in real time, or if time zones make this difficult, they can watch the show in the archive within 15 minutes after the end of each live performance. We have been told many times that nothing beats being at a show in person and some of our best shows are the ones where we perform for free in parks around the Bay Area. According to Moonalice legend, there’s something about the feel of grass while dancing with bear feet…

DR: What made you want to join DeliRadio and what can you say about your experience with it so far?

RM: "We joined DeliRadio as a part of our preparation for our upcoming art show and concert at Brooklyn Bowl on Sunday 28th October. Folks who are interested in coming out to the show will be able to listen to and download a selection of our music before the event, including “It’s 4:20 Somewhere!”

DR: Why move away from the traditional album format?

RM: The members of Moonalice are hippies of a certain age, no longer beholden to record labels, lawyers or producers. At this point in our lives all we care about is playing music and having fun. We play a lot of shows (approximately 100 a year), write a lot of songs, record a lot of songs and try new stuff all the time. We feel that live music should be a communal experience where the listener and musicians feed and derive inspiration from each other. Our songs try to speak to everyone, mixing a variety of genres with extended musical improvisations that evoke a sense of adventure and exploration.

DR: What’s on the horizon for Moonalice?

RM: The idea behind Moonalice was simple: create a band the way I would a tech start-up, leveraging technology wherever possible. We will continue to push the envelope on both tech hardware and software (our state of the art satellite system and our website, www.moonalice.com, with integrated social networking and HTML 5 audio and video players) as well as heartware (unparalleled fan engagement) so that fans can experience what it is to be a member of our Tribe on any device, anywhere and at any time.