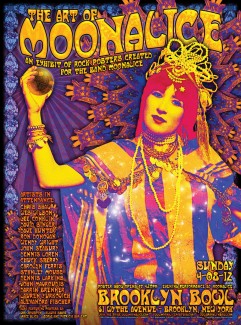 NEW YORK, NY - March 30, 2012 Moonalice is a band of seasoned musicians who feel that live music should be a communal experience where the listener and musicians feed and derive inspiration from each other. Their songs try to speak to everyone, mixing a variety of genres with extended musical improvisations that evoke a sense of adventure and exploration.

Since the band’s formation in in 2007 they have had a special relationship with the art of the rock poster. They have commissioned an original rock poster for every gig and given them to their fans for free. Moonalice has produced a unique series of over 450 original gig posters from over 20 of the most well known poster artists of the past and the present.

On April 8th at 4pm at the Brooklyn Bowl they will host a free exhibition of the complete artwork of Moonalice. All 450 posters commissioned from many of the legendary poster artists of the psychedelic 60’s as well as today’s top rock poster artists working in the tradition will be on display. Artists in attendance at the exhibition will include such top names as David Singer, Stanley Mouse, Wes Wilson, Chris Shaw, Alexandra Fischer, Lee Conklin, Dave Hunter, Carolyn Ferris, Dennis Larkins, Wendy Wright, Chuck Sperry, Ron Donovan, Dennis Loren, John Seabury, John Mavroudis, Lauren Yurkovich and Darrin Brenner. The show will also feature posters by Gary Houston, Claude Shade, Grace Slick and Patricia Sargent.

From the beginning Moonalice made up its mind to let poster artists do what they do best –make art. Unencumbered by standard constraints, Moonalice posters are as diverse as the artists who create them.

In his blog, Gammalyte, poster artist David Hunter said, “Given virtually 100% artistic freedom, the Moonalice poster series has been a pleasure to work on, allowing me to explore new design realms, diving deep into the cerebral vortex and adding to the ever growing legend of Moonalice.”

Roger McNamee (Bass, Guitar and Vocals), aka Chubby Wombat Moonalice has helped the band pioneer the use of social media in music. In the spirit of trading freely their music for the time and attention of their fans, the band invented such applications as Twittercast concerts, Moonalice radio on Twitter, live Moonbeam (video) concerts and the Couch Tour. The band’s website enables fans to listen to any song or show and to watch every concert on a smartphone without an app. Moonalice’s single, “It’s 4:20 Somewhere” has been downloaded more than 1,335,000 times.