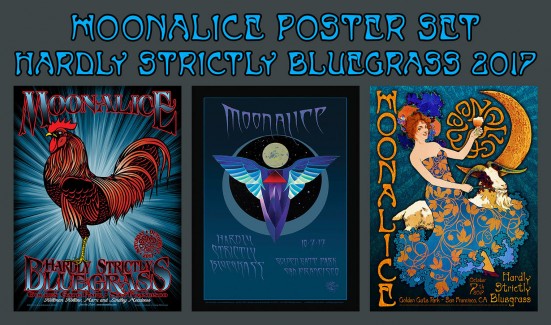 "Getting to play at all is a privilege…getting to play a big gig like HSB is just really something else,” said Roger McNamee of Moonalice whose set will be on Saturday at 12:20pm on the Towers of Gold Stage. “There’s a guy named Warren Hellman, an investor who was just really successful. His philanthropy has been all about making San Francisco a better place to live…so we can go see the arts, have an education, enjoy the parks and things like that. When he died, in his will he left a trust to support the Bluegrass Festival, which he has been paying for since it started fifteen years ago. He pays 100% of the costs so it’s free to everybody.”

“I think he initially did it so he could give the biggest payday of the year to his heroes in the bluegrass world. So it was Doc Watson, Earl Scruggs and people like that,” Roger continued, “He would have them out, give them a huge pay day and have them play in front of their biggest crowds of the year. Then the thing morphed into something that was bigger than just bluegrass…and became “Hardly” Strictly Bluegrass. When that happened we - Moonalice - started getting invited, and it is pretty special. There’s a ton of great festivals out there, and if you’re in a band getting to play at a festival is really an awesome thing. It’s just a great vibe, being at a festival.”

Every who attends the Moonalice set will receive a set of three posters from leading Bay Area poster artists. Left to right by Stanley Mouse, Chris Shaw and Alexandra Fischer.

If you can't attend in person, you can watch the Moonalice set as well as performances from 5 stages at HSB right here on www.moonalice.com!!!