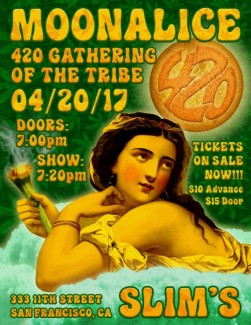 “We are a psychedelic roots-rock band of seasoned musicians mixing a variety of genres with unexpected musical improvisations," said Roger McNamee describing how Moonalice began when T Bone Burnett approached him and others to form a new band not a heritage act. “What initially was simply a project to make an album of songs, then turned into a force of music all its own,” said McNamee.

Moonalice streams all its shows live in HD via satellite on its website and also on its Facebook page to its more than 420,000 fans. "With the new technology said McNamee, people can take a peak at the music - our previous performances and decide whether or not they want to come see a show. That way they will know what they are paying for." He emphasized that what they will get is a complete experience. “The live music, the lights, the art work, and the stepping into new horizons of music-expression. It’s kind of like a stew,” he said, “It is experimental, it is meant to be fun, and with the audience being there, it all ties together."