Moonalice will perform at BottleRock Napa 2016!!! 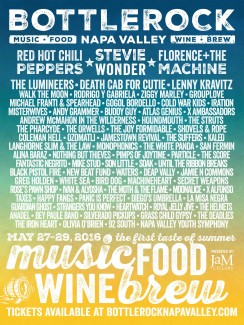 “We’re incredibly excited about our all-star lineup and what we have in store this year,” said DaveGraham, CEO of BottleRock Napa Valley and Latitude 38 Entertainment. “Our festival and foodie enthusiasts have come to expect a certain level of quality and entertainment from BottleRock and each year, we strive tomake the event even better than the last. This year’sfestival promises evenmore world classmusic andmore of what makes the Napa Valley so legendary.”

In 2015, BottleRock Napa Valley welcomed more than 100,000 music,food and wine fans during itsthird annual
installment in historic downtown Napa. The sold-out 2015 weekend featured more than 90 performers on five
stages including Imagine Dragons, No Doubt, Robert Plant and more. One of the biggest highlights of the 2015
festival was the newly added Williams-Sonoma Culinary Stage which featured a unique mashup of cooking
demonstrations with renowned chefs, celebrities, performers and rock stars. Details on the 2016 culinary stage
will be announced at a later date.

THREE-DAY GENERAL ADMISSION PASS | Starting at $269
Anything but general, the general admission pass provides all that BottleRock is known for: 70+ bands on four
music stages plus celebrity, chef and vintner performances on the culinary stage with greatsightlinesthroughout
the venue. Tickets also include access to gourmet food from the Napa Valley’s finest chefs and restaurateurs,
craft beer, specialty cocktails and dozens of wine cabanas where you can sip,savor andmingle with yourfavorite
vintners, making every festivalgoer feel like a VIP. Pass holders also receive in-and-out privileges. Three days of
world-class music combined with wine country living at its finest!

THREE-DAY VIP PASS | Starting at $599
For those BottleRockers who want more from their festival experience, the 3-day VIP Pass really cranks up the
perks. VIP guests will have access to the VIP Village, an oasis featuring premium bars, expanded culinary
offerings, a VIP viewing deck, comfy seats, shade, live acoustic performances, DJ sets, upgraded VIP-only
restrooms and much more - all located adjacent to the JaM Cellars main stage.
VIP ticket holders will also receive up-close prime viewing areas and shade at each stage, an easy-access corridor
between the JaM Cellars main stage and the second stage, a separate fast lane festival entrance and exit,
in-and-out privileges and the opportunity to purchase a parking pass exclusive to VIP ticket holders, located
within a short walk of the VIP entrance. There are a limited quantity of VIP Passes.

THREE-DAY VIP PLUS SKYDECK PASS | Starting at $950
Along with all of the VIP benefits, VIP Plus Skydeck pass holders have access to an exclusive, elevated viewing
platform. The Skydeck is the ultimate location to experience BottleRock. With unparalleled views of the JaM
Cellars main stage, you’ll have comfortable lounge seating to see your favorite chefs and musicians without
leaving the Skydeck. VIP Plus Skydeck guests have access to all-day complimentary beer, cocktails and wines.
There are a limited quantity of VIP Plus Skydeck passes. Private suites are available for parties of 20 or more.