MoonTunes® player - Better than ever!!! 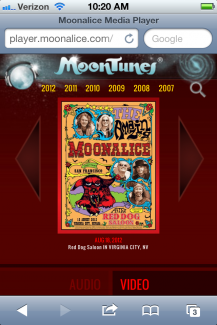 MoonTunes is an HTML 5 player for iPhone / iPad / Android that allows Moonalice's fans to access live video streaming of shows, a 160+ show video archive, a 450+ show audio archive, and 500+ posters, all for free!

According to band leader, Roger McNamee, “We have just upgraded to a new high capacity satellite with a 10 MB uplink, which doubles quality to full HD video.” Which explains comments from happy fans like, “Watched the show last night in home theatre. Thank you. Great quality / sound and feel.”

Roger explains how to use MoonTunes, “If you have an iPhone or iPad, just go to http://www.moonalice.com and it will offer you the opportunity to "Launch Beta iPhone / iPad Player." Press that link. When the app boots, touch the Arrow button to the left of the URL bar on iPad, or the arrow on the task bar above the Home Button on iPhone, and "Add to Home Screen.” That will put an icon on your home screen that makes our player behave like a native iOS app . . . only faster.”

He continues, “The app launches either the show of the day, or the most recent one we have played. Navigate to past shows by touching the left arrow. When there is audio or video content, the Audio and Video buttons will be bright. If you touch the poster, it will expand. The button in the upper right will then reveal the Legend for that show.”

Moonalice fans with Android phones have not been forgotten and a beta version of MoonTunes for Android can be found at http://player.moonalice.com. Fans are reporting that the best experience with Audio is to use the new Chrome browser for Android, and that the best experience for Video is to use the browser that comes standard with Android phones.

According to one happy fan with an Android phone, “MoonTunes for Android is absolutely amazing! I recently made a road trip from Chicago, IL to Green Bay, WI and was able to stream four hours of Audio of my favorite Moonalice shows with fantastic sound quality and without any interruption!”

Moonalice plays more than 100 shows a year, mostly on the west coast. The band will be returning to the east coast and NYC on October 28th for their second iconic Art of Moonalice poster show and concert at the Brooklyn Bowl.

this should be featured in Mozilla's upcoming Marketplace app store for web apps. And funny, I work for Mozilla! Would love to talk to someone about how we can support you getting this into the store (we can offer tech help ;)