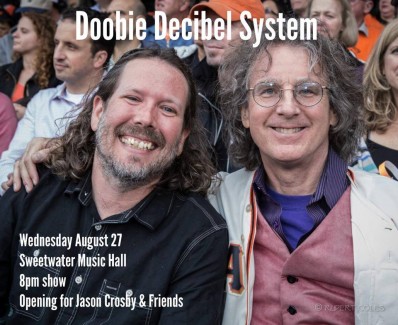 Roger McNamee is pleased to announce that he and Jason Crosby have formed a duo called "Doobie Decibel System!!!" They played their first show on Wed. August 27 at the Sweetwater Music Hall. (You can watch it at http://www.moonalice.com/tour/2014-08-27/jason-crosby-friends-sweetwater).

Over the last decade, Jason Crosby has been a member of Robert Randolph and the Family Band and the Susan Tedeschi Band, among others. In recent years, Crosby has played with Bob Weir, Phil Lesh, Carlos Santana, Pete Seeger, Eric Clapton, Bruce Springsteen and Dave Matthews in various configurations. His discography is equally as impressive with appearances on Anastasia’s multi-platinum hit “Freak of Nature” as well as Tedeschi’s Grammy Nominated “Wait for Me”; and more recent releases from Phillip Phillips, Pretty Lights, Robert Randolph, Teddy Thompson and many more.

Roger McNamee performs more than 100 shows a year with Moonalice, where he is the lead vocalist and plays bass and guitar. In Moonalice Roger pioneered the use of social media in music, inventing such applications as Twittercast concerts, Moonalice radio on Twitter, live MoonTunes TM (streaming video) concerts, and the Moonalice Couch Tour TM. The band’s website (http://www.Moonalice.com) enables fans to listen to any song or show and to watch every concert on a smartphone without an app. Moonalice is renowned for the quality of poster art associated with the band. Moonalice’s single, “It’s 4:20 Somewhere” has been downloaded more than 5 million times.

The Doobie Decibel System has a number of shows coming up - details can be found under Events on their Facebook page at https://www.facebook.com/DoobieDecibelSystem.