On March 16, 2020, the night before quarantine began in California, Lebo, Jason Crosby, and Roger McNamee did a Facebook Live livestream concert. Little was known about quarantine, but over the prior 72 hours we had been forced to cancel the first month of a huge Full Moonalice tour and were hoping to replace it with livestreams structured to raise money for the venues that would have hosted the cancelled shows. With that in mind, we converted the living room at Roger's house into a studio big enough to hold all ten members of Full Moonalice.

The Full Moonalice poster artists are sheltering in place, but many of them are making great art. Some of that art relates to the pandemic. Here is some of their work ...

The pandemic forced us to move the annual 4/20 Gathering of the Tribe online ... we could not distribute posters this year, so we are sharing them here. Not all of the posters are done — many are missing text — but here is a sample of what our artists created for the 4/20 Gathering.

03.16.20
Moonlight In The Darkness Postponed - Enjoy Posters From Cancelled Dates

Dear Tribe members - it is with heavy hearts that we have to postpone our planned Full Moonalice streams for at least the next few weeks. New restrictions for the entire San Francisco Bay Area mandate that everyone must “shelter in place” until further notice. We are not allowed to leave our homes or travel except for a narrow set of purposes. Unfortunately, playing music is not on the list. 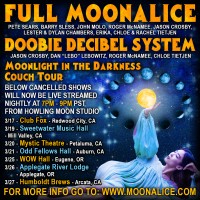 Full Moonalice: The THC Revue ​(Moonalice + T Sisters + The New Chambers Brothers)​ & Doobie Decibel System​ are teaming up to do what they do best, sharing songs and getting creative in a time when we all need a little light. After getting word their March tours were going to be cancelled, they came up with a solution...stream direct from ​Howling Moon Studio, ​via​ ​nugs.net​.