According to Moonalice legend, membership in the tribe has been a matter of self-selection, rather than birth. While this disqualifies the tribe for casino ownership, it minimizes squabbling at holidays. In the new Moonalice era, the tribe welcomes all fans of low tones. All we ask is that aspiring Moonalice tribe members choose an appropriately humorous moniker.

Wavy Gravy's Summer of Love Revival brought more than 500 new members into the tribe on a chilly day in Marin County. With four players on bass, the band delivered a tasty baker's dozen of songs, including Blink of an Eye, Moonalice's first studio release.

The afternoon also saw the revival of an ancient Moonalice ritual: mooning the band. True to the ancient custom, the mooner in question did a slow strip tease (revealing a most extraordinary matched set of red and white striped undies), before going for the full monty. The mooner was also wearing a bright red clown nose . . . it was none other than Wavy himself!!!

This was our first MA show. I guess we didn't really "get it" at the time. It was nice to see G.E. Smith. Somewhere I have not only the official poster, but the one that was used to advertise it in shop windows. 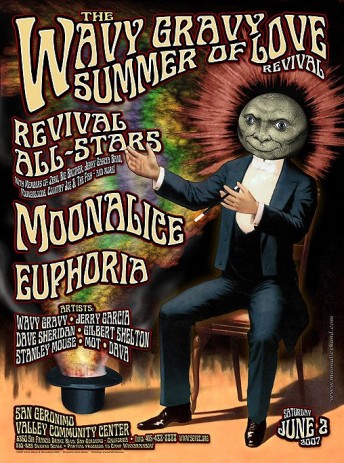