AUDIO COMING
Share
Facebook
Twitter
+
VIDEO COMING
Previous Shows
Find           Show
Next Shows
Great American Music Hall - San Francisco, CA
view »
Union Square - San Francisco, CA
view »
San Geronimo Valley Cultural Center - San Geronimo, CA
view »
Accelerate Brain Cancer Cure Benefit - Atherton, CA
view »
United Nations Plaza - San Francisco, CA
view »
VIEW MOST RECENT SHOW »
Camp NCN - Grateful Garcia Gathering - Black River Falls, WI
view »
Camp NCN - Grateful Garcia Gathering - Black River Falls, WI
view »
Alice's Champagne Palace - Homer, AK
view »
Alice's Champagne Palace - Homer, AK
view »
Maxine's Glacier City Bistro - Girdwood, AK
view »
KEUL - Alaska Radio - Girdwood, AK
view »
Hangar On The Wharf - Juneau, AK
view »
Hangar On The Wharf - Juneau, AK
view »
KHNS - Alaska Radio - Haines, AK
view »
The Red Onion - Skagway, AK
view »
VIEW MOST RECENT SHOW »
Union Square IN SAN FRANCISCO, CA
0
I was there
Buy Poster
Legend
Media
Comments
Who Was There?
According to Moonalice legend, the tribe in ancient days wandered the continent in search of spiritual fulfillment. At some point long ago, the tribe found itself in the city of giants, where the gates were golden, the hills steep, and the air filled with aromatic breezes from Humboldt and Mendocino counties. It was there, in the city of St. Francis, that the Moonalice tribe discovered the power of free music. The tribe was told that if it could haul its instruments up the hill known as Nob there would be a high paying gig at some schmantzy hotel. Years of idleness had taken their toll, however, and the tribe took only one look at hill before deciding that money was not a good reason to schlep their gear any further. This realization hit the tribe at the corner of Post and Powell streets, in a public space that was home to the Teamsters and a predecessor to the AFL-CIO. Standing on edge of this Union Square, the tribe found both spiritual fulfillment and the union movement. Soon the low tones of traditional Moonalice music could be heard across the square and there was much joy in city by the bay. The present day tribe of Moonalice gathered on this last day of July of 2007, hoping to recreate the spiritual fulfillment of those days gone by. Under a blazing sun, just after midday, the band did its thing for a squareful of fans. Fulfillment was everywhere. Noting that the Teamsters and AFL-CIO were nowhere to be found in Union Square that day, Chubby Wombat Moonalice offered to acquire some Ex-Lax to get the labor movement started again. The rest, as they say, is history. 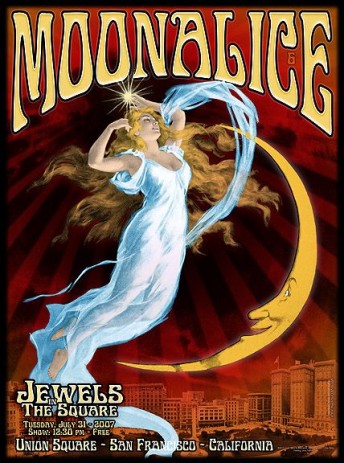