AUDIO COMING
Share
Facebook
Twitter
+
VIDEO COMING
Previous Shows
Find           Show
Next Shows
The Red Onion - Skagway, AK
view »
KHNS - Alaska Radio - Haines, AK
view »
Hangar On The Wharf - Juneau, AK
view »
Hangar On The Wharf - Juneau, AK
view »
KEUL - Alaska Radio - Girdwood, AK
view »
Maxine's Glacier City Bistro - Girdwood, AK
view »
Alice's Champagne Palace - Homer, AK
view »
Alice's Champagne Palace - Homer, AK
view »
Camp NCN - Grateful Garcia Gathering - Black River Falls, WI
view »
Camp NCN - Grateful Garcia Gathering - Black River Falls, WI
view »
VIEW MOST RECENT SHOW »
Union Square - San Francisco, CA
view »
KPIG - Freedom, CA
view »
Moe's Alley - Santa Cruz, CA
view »
Marinship Park - Sausalito, CA
view »
Sawtooth Ridge Cafe - Tahoe City, CA
view »
Hyde Street Pier - San Francisco, CA
view »
Big Sky Resort - Big Sky, MT
view »
Union Square - San Francisco, CA
view »
The Canyon Club - Las Vegas, NV
view »
Golden Gate Park - San Francisco, CA
view »
VIEW MOST RECENT SHOW »
Tribal House IN HAINES, AK
0
I was there
Legend
Media
Comments
Who Was There?
According to Moonalice legend, one branch of the family tree controlled the land around a harbor in what is now the village of Haines. Back in Alaska's early years as an "altered state," they built Castle Moonalice, a fortress so poorly located that it could neither see the harbor from its ramparts nor reach enemy ships with its guns. Castle Moonalice was home to Moon---hole Moonalice I and his heirs. Moon---hole I married his sister, beginning a family custom that persisted through twenty-three generations. The last of the line, Moon---hole XXIII, was such a complete imbecile that he set siege to his own castle, ultimately starving his family and destroying the place. All that remained was the foundation, which was never seen again. When the modern Moonalice arrived in Haines, the plan was to visit the tomb of Moon---hole XIII, known to his subjects as Dimwit. The tomb was cool, but paled in comparison to the gig we played in the Tribal House. All of Haines was there and the party went on until dawn, at which time we stumbled into the parade ground of Haines' historic Fort Seward. There we saw the remains of an army barracks building that burned down a few years ago. Vaguely reminiscent of something we learned in our study of Moonalice legend, the old foundation begged for follow-up research. Two calls to the Moonalice Historical Society confirmed what we had already begun to suspect. The barracks had been built atop the remains of Castle Moonalice! Hard to believe, but there you have it. 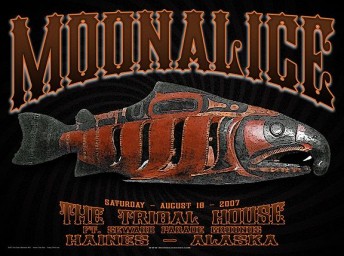