AUDIO COMING
Share
Facebook
Twitter
+
VIDEO COMING
Previous Shows
Find           Show
Next Shows
Tribal House - Haines, AK
view »
The Red Onion - Skagway, AK
view »
KHNS - Alaska Radio - Haines, AK
view »
Hangar On The Wharf - Juneau, AK
view »
Hangar On The Wharf - Juneau, AK
view »
KEUL - Alaska Radio - Girdwood, AK
view »
Maxine's Glacier City Bistro - Girdwood, AK
view »
Alice's Champagne Palace - Homer, AK
view »
Alice's Champagne Palace - Homer, AK
view »
Camp NCN - Grateful Garcia Gathering - Black River Falls, WI
view »
VIEW MOST RECENT SHOW »
KPIG - Freedom, CA
view »
Moe's Alley - Santa Cruz, CA
view »
Marinship Park - Sausalito, CA
view »
Sawtooth Ridge Cafe - Tahoe City, CA
view »
Hyde Street Pier - San Francisco, CA
view »
Big Sky Resort - Big Sky, MT
view »
Union Square - San Francisco, CA
view »
The Canyon Club - Las Vegas, NV
view »
Golden Gate Park - San Francisco, CA
view »
Oriental Theater - Denver, CO
view »
VIEW MOST RECENT SHOW »
Union Square IN SAN FRANCISCO, CA
0
I was there
Legend
Media
Comments
Who Was There?
According to Moonalice legend, the Coming of the Seventh will be proceeded by the Introduction of the Fifth. Every Moonalice school child knows the Seventh to be Yggdrassil, a bass player of such prodigious talent that all other bass players would take up other instruments. But who or what is the Fifth? Such a mystery!!! Could it be a bottle of scotch consumed by disappointed band members who have been forced to give up their four-stringed instruments in favor of those with six or eighty-eight strings? Or could it be something else? The mystery has finally been solved. At rehearsal for this gig in Union Square, Half Moonalice, the distaff member of the band, took up the bass for the very first time. She was the fifth member of the modern Moonalice troupe to perform on the exalted instrument. Showing a technique that may one day revolutionize bass playing, Half riffed like a madwoman, causing some to wonder what the big deal is with this Yggdrassil guy. Moonalice insiders know the truth. Yggdrassil is none other than Jack Casady, who will rejoin Moonalice later this week in Santa Cruz. As a result, the gig in Union Square may represent the final appearance on bass - for now, at least - of Chubby Wombat and Hardwood Moonalice. CW and Hardwood may be done, but they didn't go quietly. Every knob was turned up to 11. 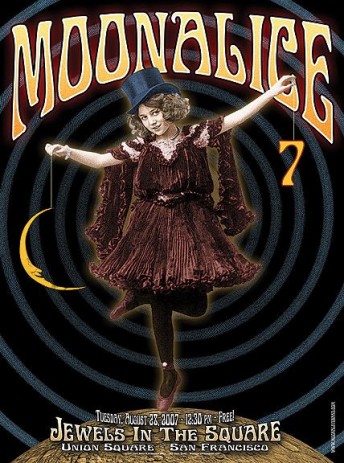