According to Moonalice legend, only one show in Moonalice history has been cancelled due to a sand storm. This was the one.

According to Moonalice legend, tonight’s poster by Alexandra Fischer depicts the matriarch Moab Moonalice, the patron saint of Hollywood science fiction. Moab came to prominence when her spaceship clipped the television antenna off the house where Steven Spielberg grew up, which caused Spielberg to miss the Beatles on Ed Sullivan. Spielberg got the last laugh when he released Close Encounters of the Third Kind. Because of the antenna incident, the tribe cited Moab for reckless driving and sentenced her to watch worthless B movies in a garbage skow in endless Earth orbit. Joel Hodgeson used that story as the basis for Mystery Science Theater 3000. Apparently Moab also messed up Donald Trump’s hair, but we haven’t seen that movie yet.

No Tribe members have listed their attendance for this show yet. 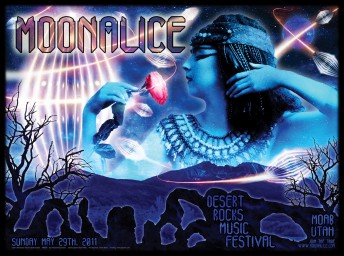