According to Moonalice legend, today's poster by Chris Shaw depicts the ancient Moonalice god of bowling, Frankenstorm Sandy. Sandy's main bowling tools were bongs and single hitters, but after a monster smoke out he was often liked to throw big balls of weather at the East Coast. Apparently, Sandy has thrown today what appears to be a strike aimed at Brooklyn, so if you feel like freaking out, please consult with Big Steve!

If I read the poster correctly, Sandy likes his storm victims naked. You have been warned.

This show was originally scheduled to start at 7:30pm. Due to the imminent approach of Hurricane Sandy, the start time moved (in stages) to 2:45pm, so that everyone could get home before NY City shut the subways and buses. 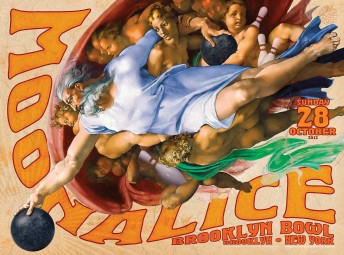