According to Moonalice legend, the WOW Hall has a longer history than anyone knew. The history of this building refers to 1883 as the founding date. We consulted the Moonalice legend to find alternate facts. As depicted in tonight's poster by David Singer, the original Woodmen of the World were nymphs who lived in the forest in what is present-day Eugene. They called themselves the Jerry Pranksters and lived entirely on magic mushrooms. After much singing and dancing in the woods, they built the original WOW Hall under the tree canopy. They didn't have a sound system -- or even electricity -- but they had plenty of weed, so it didn't matter. 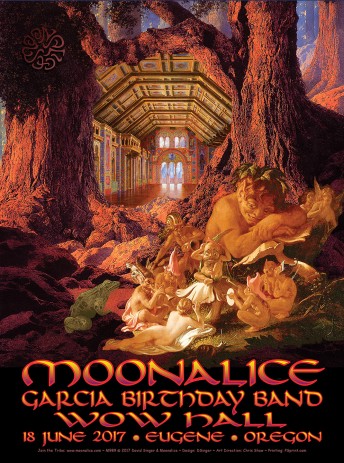