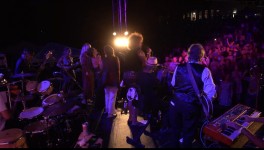 According to Full Moonalice legend, the band has experienced 20% growth in 2021! Erika and Chloe have beautiful babies …

Today’s poster by Alexandra Fischer depicts Desi Full Moonalice and Asa Full Moonalice, two lovely cubs who plan to dance up a storm … as soon as they learn to stand up! Desi and Asa give us great hope for the future — that is exactly what babies are supposed to do! — and we want each of you to have one of these wonderful posters so that you join us in that joyful, optimistic outlook.

A few months ago it appeared we would have a full touring schedule through year end and beyond. Delta had other plans, so we are going back into the studio to record. In one way, that is amazing because we never got an opportunity to release the two albums we recorded right before quarantine. But the good news is that a label — Nettwerk Music in Vancouver — likes what we are doing. So we are going to try our hand at streaming. It will all start in a few weeks.

Streaming is different. You release songs one at a time, with the album coming at the end. We are going to try a lot of things and hope you will like it.

Who knows when we will be back on the road. We hope it will be soon!