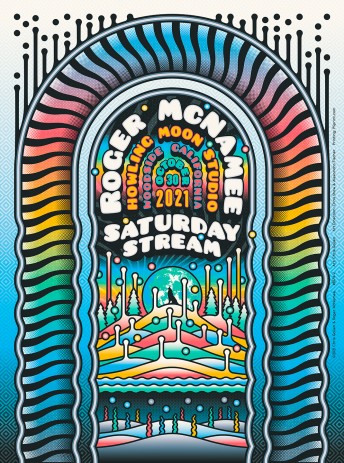 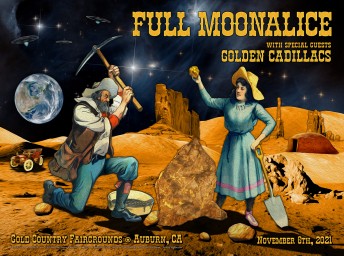 Nov 6, 2021 / Gold Country Fairgrounds & Event Center (Auburn)
According to Moonalice legend, the rains came early this year. The good news is that the rain put an end ...
view » 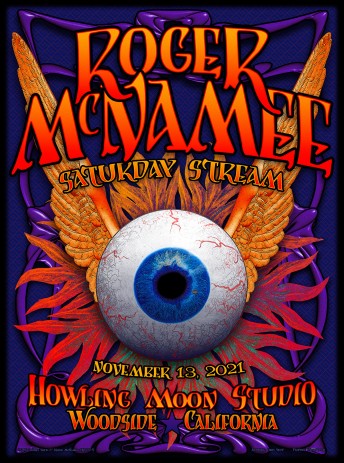 Moonalice is a psychedelic, roots-rock band of seasoned musicians mixing a variety of genres with extended musical improvisations that evoke a sense of adventure and exploration. Everyone is a part of the experience and the music inspires dancing and other acts of self expression. Every show has an original art poster created by a well-known artist memorializing that event and given to all attendees…each poster has its own Moonalice legend. All concerts are broadcasted live in HD and available in archive shortly after their set.

Moonalice plays mostly original material mixed with several covers, and during their extended freeform jams the band moves as one, drawing from many musical genres honed from years of experience playing with various major acts.

Their single "It's 4:20 Somewhere" has been downloaded over 5 million times. Just released: 420 Gathering of the Tribe by Jay Blakesberg and Alex Fischer – a short film about the Moonalice posters and poster artists: http://www.moonalice.com/song/its-420-somewhere.

Their extensive tour schedule and videos of every Moonalice show can be seen at moonalice.com and every show poster with legends can be viewed at moonaliceposters.com.

Dear Gail,
Thank you for keeping my brain fed & tickled with all this fun information.
You are like an architect, carpenter & program manager who has designed, built & keeps my "home" decorated. So, thank you!
Is there a way to incorporate view of the entire poster series into the new site's design?
I used to love to scroll through the posters along the top & actually favored that method for navigating to (re-)watch shows. I'm not attached to the format it was before, but it would be great to have even a grid-view, sort of like from the beta iphone site, but with a bunch more posters on it for the "regular site."
Also, I guess I find a few things annoying: 1) when I try to scroll through the songs in the set list, I much-too-frequently accidentally click on either the song (so I'm taken to a (usually empty) page with lyrics) or on the little icons to the right of the song; 2) in the new website (this summer) when I hover over a screen for a show, the new drop-downs automatically drop down & conceal the information I was trying to access. Maybe if the new drop-downs required an actual click, or a more-precise or longer-held hovering, that would reduce this annoyance; 3) the audio player always seems so buggy. Is this an issue with how the audio files are created? Are they recorded alongside the video, or, rather, are they recorded from the played-back video? It's not the biggest deal, because the video feature is just such a magically enriching part of my life, so I shouldn't be complaining at all, but just thought I'd make those suggestions.
Thanks again.
/Jordan

Not sure why this posted twice. Sorry.