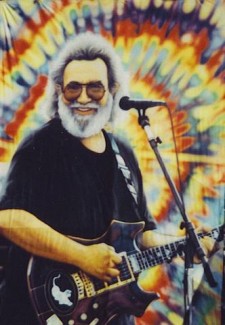 1991: Jerry Garcia, with acoustic and electric bands, inaugurated our annual fundraiser to help pay for Black Oak Ranch. Produced in cahoots with Bill Graham, it is called "Electric on the Eel."
This is a Photo of the air brush canvas painting OF a PHOTO taken at "Electric on the Eel" in 1991.

I made the Tie Dye Backdrops for the stage at French's Camp that year for the Jerry Garcia Band..... We had come up with an idea to create a raffle to raise money and start a Scholarship fund to send underprivileged inner city kids to Camp Winnarainbow up at Black Oak Ranch in Laytonville....I made three tapestries about 27X25 feet each they wound up being to large for the stage and we had to cut them to size!! The taps were raffled off by Wavy Gravy for One dollar a piece and all together that first year we raised over $8000 to help the kids go to camp to harass Wavy and make fun stuffs like bows and arrows n things ;) The Tapestries from there were won by some really cewl people who had since donated the colors to many hundreds of events around the world!!! It blows my mind that a notion of a simple idea could become such a wonderful thing as to help those kids and I'm very grateful to all who helped put together all of the raffles over the years and certainly want to thank The Hog Farm for there contributions ...Over the years the fund grew and GREW ! Ben&Jerry's Wavy Gravy Ice Cream proceeds found there way into the fund as well making it truly a Pot Of Gold at the end of Camp Winnarainbow that helped many many children attend camp for many many years who without that scholarship program might not have had the opportunity to have fun with all the other kids in camp.......

Helping create these tapestries back in 1991 was one accomplishment I'm very proud of artistically and surely because of what it helped produce for the kids .