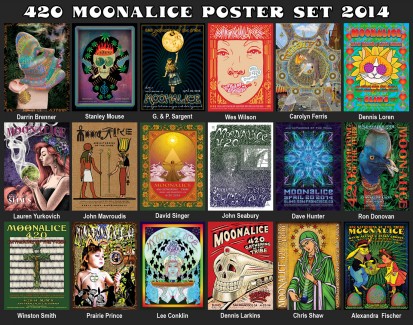 According to Moonalice legend, each attendee at the 4/20 show at Slim's will receive a set of 18 posters as a gift from the band! Each poster is amazing and unique in its own right, together they make for a mind blowing collection of the very best of rock poster art! There will also be an exhibit of the all 696 posters in the Moonalice series.

For Moonalice, 4/20 – with its annual 420 Gathering of the Tribe, is the highest of high holidays. Moonalice’s Barry Sless, Pete Sears, John Molo and Roger McNamee will rip it up with two sets. Wavy Gravy and Big Steve Parish will be emcees. David Nelson will be a special guest, along with opening act Jason Crosby & Friends (with Dan (Lebo) Lebowitz on guitar & vocals, Jay Lane on drums and Chris Crosby on bass).

As if poster art and rock and roll was not enough, lots of bunnies (big and small) can be expected, as can treats galore and an Easter egg hunt with fabulous prizes including tickets to BottleRock for Friday & Saturday (the two days that Moonalice is performing, event continues on Sunday), plus tons of Moonalice schwag including; poster art books, CD packs, t-shirts, sweatshirts, ashtrays, rolling papers and so much more!

The Poster Show opens at 4pm in the Warren Hellman’s Exhibit Center next to Slim’s. Three silk screen posters created for this event by Alex Fischer, Gary Houston and Chuck Sperry will be available for purchase. All guests can have their photo taken with the bunny in the Photo Booth and will go home with a personalized memento, along with the previously mentioned set of 18 posters!

To see posters and concert videos from every Moonalice show visit www.moonalice.com.

Moonalice’s single, "It’s 4:20 Somewhere," has been downloaded 4.4 million times. You can download it at http://rvrb.it/1dtDJVn.