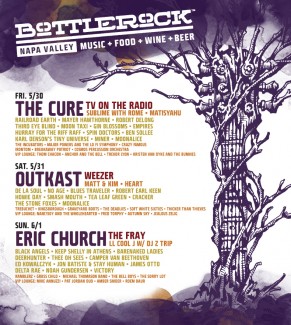 Following their performance at the BottleRock Napa Fesival on 9 May last year, Moonalice will be returning for two performances at this year's festival, on Friday 30 and Saturday 31 May, joining the 45 artists that have so far been confirmed and announced.

“Internationally celebrated artists The Cure, Outkast and Eric Church will headline BottleRock Napa Valley this spring creating an incredibly diverse lineup of talent that puts Napa Valley on the world-wide music map,” said David Graham of L38, the organizers of this year's event.

“With a mixture of rock, alternative, hip-hop, bluegrass, country, urban and more, plus the incredible food and wine partners that make BottleRock so unique, we’ve got something for everyone,” added Graham. “As we continue to announce artists, you will see many well-known names along with a full lineup of homegrown Bay Area and California-bred local artists. BottleRock is cultivating local talent while giving them a platform to a national audience.”

According to Roger McNamee who founded Moonalice, "We are psyched to get a second set. The setting is magic. Music in a magic place!!! BottleRock is where you come for your faves ... and then try some new stuff you would not otherwise be exposed to."

Moonalice is the legendary psychedelic, roots-rock band of seasoned musicians mixing a variety of genres with extended musical improvisations that evoke a sense of adventure and exploration. Everyone is a part of the experience and the music inspires dancing, twirling and other acts of self expression. Each guest leaves with an original art poster memorializing the show by a well-known poster artist. Band members include Barry Sless (lead quitar, pedal steel guitar, bass), Pete Sears (keyboards, guitar, vocals), Roger McNamee (rhythm and lead guitar, vocals, bass), and John Molo (drums, vocals).