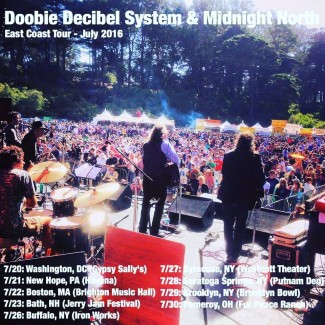 As the Doobie Decibel System Band gets ready to head out on an 8 show Northeast Tour with Midnight North, here’s a bit of the back story about how the DDS Duo and the Band version of DDS came to be.

As Roger McNamee described it in this interview with “Live For Live Music” just before the first DDS Band tour last year, “We are so lucky in the San Francisco Bay area because Bobby Weir, Phil Lesh each have a venue out here. Sweetwater for Bobby and Terrapin Crossroads for Phil, and they have each created an environment that encourages local musicians to come and experiment.”

Describing how the DDS Duo was formed, Roger continued, “There are a ton of opportunities to come and play with folks whose regular gig is another band. So for Jason and me, who play with Moonalice...and we got together before Jason (Crosby) started playing with Moonalice, we were playing at an event together, but separately, and he suggests we get together and just play. So when we got together and played it was just like magic. We each found the we had a really great vocal blend, it was just so much fun.”

“Then when we started playing our first shows together we got a chance to participate in another one of the what we call "Friends" shows...somebody organizes the players and we kinda mix and match. Lebo was there, from ALO, Animal Liberation Orchestra, Jay Lane was there, from Ratdog and Pete Sears, from Moonalice was there,” said Roger, “So we wound up doing a song together and everyone was like "Wow! That was fun!" We got together at a studio and tried to have a little practice and again it was like "Wow! This is really cool.""

Roger continued. “We did our first show at the Moonalice 420 event at Boz Scaggs's venue, Slim's in San Francisco. Everyone went "Wow! This is really fun! We should do this again!" Then the challenge came up...everyone's gotten big. Pete, Jason and I are playing with Moonalice, Lebo is out there with ALO, they're recording a new album and getting ready for a tour...Jay is playing with a variety of bands...so the scheduling was a nightmare. So we said "Okay fine, let's pick some dates that are way out there at the end of September and…here we are!”

That was September, 2015. The rest, as they say in show business, was history, and still rocking out together, the DDS band will be playing a number of gigs together with Midnight North this July.

Says Roger, “We will tour the Northeast later this month and play 8 shows with Midnight North, with shows in DC, Philadelphia, Boston, Bath (NH), Buffalo, Syracuse, Saratoga Springs, and Brooklyn. DDS will finish the run with a sold out show at Jorma L Kaukonen's Fur Peace Ranch.”

Here are the dates / locations for the Northeast Tour gigs. More information can be found on the DDS website at www.ddsband.com or on the DDS Facebook page at https://www.facebook.com/DoobieDecibelSystem/events.

Final word from Roger, “Hope to see you there!!”