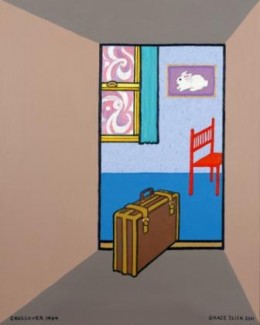 Legendary singer Grace Slick will team up with Moonalice for a ‘Visual Concert of Grace Slick’s Phantasmical, Whimsically Droll" on April 22 at George’s in San Rafael, CA. The exhibition will feature her newest painting, titled “Crossover,” along with a live performance from Moonalice.

According to the press release: "Moving from the beige world of the 50’s into psychedelic San Francisco circa 1964 these paintings deals with a shifting of focus, instead of being on the road she now paints the visual concert that you will experience at the show. Since last summer Grace has been concentrating on a new series of work that could best be described as dreamlike visions. Using bold color and flourishing designs Grace transports us into the world in which she lives. Colorful landscapes and friendly folks inhabit her paintings along with her fantastic animals Grace Slick is moving into a very elite circle of painters in today’s contemporary art world."

The exhibit will take place from 6-8PM, followed by a live performance by Moonalice at 8:30PM.