Moonalice performing at the BottleRock festival in Napa on May 9!!! 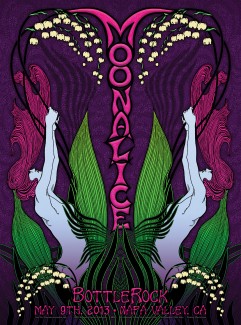 The BottleRock festival in Napa is going to be the ultimate celebration. On a scale of 1 to 10, we’re giving it a 42!!! And Moonalice is going to be there on May 9 at 1:30pm on the WillPower stage followed by ALO and The Black Crowes!!!

BottleRock is a five-day, delicacy-fueled foray into the absolute best music, comedy, wine, food, and beer the world has to offer. From the 9th through the 12th May, downtown Napa will the epicenter of a collision of music, food and wine that is going to reverberate for miles around.

Three main stages at the Napa Expo, will be home to the heart of the BottleRock experience, where you will be able to savor the offerings from some of Napa’s top restaurants. Each day over 30 restaurant partners and food trucks will delight your palette with everything from tapas to cupcakes, BBQ to sushi, and beyond.

You will be able to wash the fine fare down with a glass of chardonnay, a cup of cabernet, a mug of merlot, or pretty much anything else offered up from some of the top wineries around, or a brew from Bud Light, a festival sponsor.