Rock Out To The Music Of 1967 at The Surrealistic Summer Solstice Jam On 21 June!!! 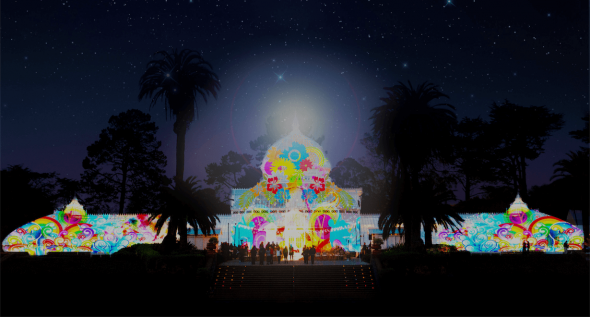 Developed in partnership with San Francisco Recreation and Parks by Illuminate, the nonprofit arts group behind The Bay Lights, and Obscura Digital, a world-renowned creative studio specializing in large scale light-based art, the installation will use gobo projectors to transform the all-white landmark with a series of exquisitely illuminated scenes inspired by the rare tropical flowers within, and the legacy of San Francisco’s flower children.

The opening night on 21 June – which coincides with the Summer Solstice – will include a musical celebration from members of the best jam bands San Francisco has to offer.

“The Surrealistic Summer Solstice Jam will combine the music of 1967 with an epic Illuminate and Obscura Digital light show on the Conservatory of Flowers! Dan Lebowitz is music director. The house band will include members of ALO, Moonalice, and other great SF musicians. Jack Casady, Country Joe McDonald and many others are scheduled to perform. The concert and light show are free … and it's the longest day of the year,” explained Moonalice’s Roger McNamee.