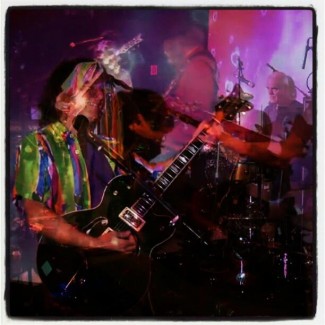 Kevin Smith is communications director at DeliRadio, “a free, location-based music platform connecting listeners with local concerts.” Here he shares his thoughts on Moonalice who are currently on an east coast tour.

The days of rockstar mystique— when an artist could retain a mysterious distance from fans — are over. Today, fans expect access to their music idols at all times via Twitter, Facebook, and Instagram, and artists new and old must develop an engaging online presence to meet that demand. Working at DeliRadio, I get to see firsthand the bands that are taking the lead in online promotion. (For the uninitiated, DeliRadio – “radio for concert lovers” – plays music by bands with upcoming shows nearby. It can also play venue and festival lineups, or your hometown acts.) So far, one of the most impressive examples I have seen of an act on DeliRadio that has cultivated a vibrant online presence has been independent folk rock act Moonalice. I had seen Moonalice’s artwork before (we’ll get to that later), but it wasn’t until they joined DeliRadio that I visited their website and dug a little deeper and was amazed at what I found. The band has unceremoniously dispensed with much of the preconceived wisdom of self-promotion of the traditional record industry, and been blazing its own trail online. I contacted Moonalice to talk about some of the ways it’s accomplished that, and where it’s going next.

Moonalice formed in 2007 and creates the kind of swaying, soulful, tie-dyed folk rock that has roots and spirit in the culture of the 1960s. Within the group’s nostalgic sound and hippy visual aesthetic, there are lots of counter culture references, be it about getting high (“It’s 420 Somewhere”) or just not letting hard times get you down (“American Dream Rag”). Moonalice is made up of Bay Area rock scene veterans: Barry Sless (lead guitar, pedal steel, bass), Pete Sears (keyboards, bass, guitar, vocals), John Molo (drums, vocals). And if you’re familiar with the technology or venture capital worlds, you may have heard of Roger McNamee. Among other things, McNamee is a co-founder of Elevation Partners, a successful technology investment group which has backed everything from Facebook to Yelp, and major video game developers like BioWare. McNamee is also a co-founder, rhythm guitarist, bassist, and singer for Moonalice. Given McNamee’s intimate familiarity with cutting edge technology, you’d expect Moonalice to have a pretty savvy web presence, but that’s almost like saying Jerry Garcia knew how to play guitar.

Moonalice has made a go of it for five years now – playing over 450 gigs, and releasing 1 album and 3 EPs – all without the help of a record label, a manager, or a publicist. The money saved on traditional infrastructure was invested (among other things) in online video. Around 2010, Moonalice linked up with MobileRider, who are “expert in the delivery of live and on-demand content over the Internet and across multiple platforms.” Using MobileRider, Moonalice was able to develop a system, dubbed MoonTunes, which allows one to watch most of the band’s concerts live and online in real time HD at moonalice.com and on various mobile devices. The result for Moonalice is a powerful promotional tool — the ability for fans to watch any show performed live through the Internet, free of charge, in HD.

Building, engaging, and rewarding a fanbase

Here’s another kicker: the concerts that Moonalice streams free of charge aren’t just available for one night only. If you miss out on a live Moonalice performance, it’s most likely archived and available on-demand through the band’s website, which hosts hundreds of shows dating back to the group’s inception. This means Moonalice is accumulating a literal live career archive on its website. Instead of charging a subscription or one-time viewing fees, this content is all 100% free for anyone, anywhere to stream on Moonalice.com. By not charging for access, McNamee says that live video has “enabled us to build a committed fan base at a reasonable cost.” Moonalice makes its concerts unique events not just by live streaming, but also by commemorating each show with a unique gig poster (many can be found here). McNamee says Moonalice has amassed a group of around 20 different visual artists to create posters for each of its shows, which are free for fans in attendance, and then later for sale online. The poster collection now totals over 450 – one for every gig- and range in styles from trippy to more pop-art. If you’re in the New York area this weekend, you can see the poster collection Sunday, Oct. 28, at Brooklyn Bowl.
By constantly creating multi-media content for new and existing fans – Moonalice is seeing a big pay off in the overall engagement of its fans in social media. For instance, Moonalice’s Facebook page now shows that while over 68,000 people have “Liked” the band, there are 70,600 talking about it (measured by actions on Facebook like posting about Moonalice, answering a question posted to its wall, liking or sharing posts, etc.) For contrast, Dave Matthews Band has 2.8 million likes on Facebook, but on a recent visit had reported only around 20,000 people “talking about the band.”

Imagine Moonalice’s advantage right now: a fan discovers that the group is playing her favorite local music venue down the street in the next month. That fan then goes onto the Moonalice website and is introduced to a whole world of archived video and audio content. She then watches some of Moonalice’s shows from its current tour online , leading up to the stop in her area. When Moonalice finally arrives in her town, she buys a ticket to the show and joins the live experience, and goes home with a free poster from the band. Moonalice is laying out one template for what a music act can do in the current online media landscape that’s completely outside the scope of the traditional marketing formula.

Of course, not all bands have the kinds of technological support at their disposal that Moonalice does. So what can those with less access do for themselves in the meantime? “Video is much less expensive than people realize, but good live video is still too complicated,” McNamee says. “The short term answer is to work with Livestream, Ustream, or one of the other services. Fortunately, the problem will go away over the next year as we, and others, simplify the hardware and software.” McNamee says Moonalice is working on different ways to share and spread the technology they’ve been utilizing, and it’s already started.

Whether you’re interested in following in Moonalice’s path or blazing your own, it’s important to recognize there are a lot of unconventional ways to get your music heard today that don’t always involve stepping into a recording booth first.