Steve DeAngelo - Prop 64 is a compromise, but one that needs to be made 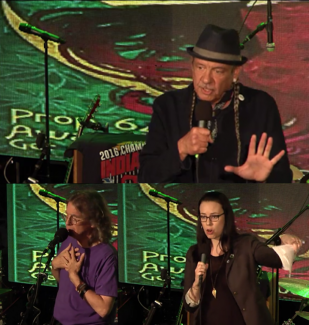 On 3 November Sweetwater Music Hall rocked to a “Get OutThe Vote Concert” to raise awareness on Prop 64, the Adult Use of Marijuana Act(AUMA), with a show headlined by Moonalice and also featuring Lorin Rowan and the 420 Waldos. The show was opened with a talk by Steve DeAngelo, one of the founders of the Harborside Health Center in Oakland, CA, followed by Lindsay Robinson, director of development of the Marijuana Policy Project, answering questions about Prop 64 and AUMA.

Roger McNamee, cannabis advocate and Moonalice founder, whose "first and driving motivation on Prop 64 is about civil rights," started the evening by explaining why he is so strongly supportive of Prop 64, saying, “This is California and this year on November 8th there is at least one really good thing that can happen. That is that we can pass Proposition 64, the Adult Use of Marijuana Act. This is something that is long overdue and absolutely I think essential to the welfare of our state."

Steve DeAngelo began by saying that to him Prop 64 was also a compromise, but one that needed to be made, “Let's think about what is this thing 64 in the first place. It's a law. It's a law that's going to be passed by the people as opposed to the legislature, but it's a law. Like most laws, it's a compromise. There were many, many different groups who got around the table to help draft Prop 64. Some of them had interest A or interest B. There were a lot of different opposing interests that needed to come together around that table to put together a team that could get this initiative on the ballot, and compromises were made in the process of drafting.”

Steve continued, “The result, from my point of view, is there is stuff in there that I love. One of things is that people like me who have felony cannabis convictions will be able to be licensed in the legal cannabis industry under Prop 64. There's things in there that I really, really, really don't like, like the power of local governments anywhere to overrule the will of the voters of California and say that, "Just in our little city, in our little town, in our county, we're not going to allow a legal cannabis industry. Even though the voters of California approved this law." Is there stuff I like? Yeah. There's stuff I like. Is there stuff I really find distasteful? Yes, absolutely.”