A Benefit for BayKids with Moonalice

According to Moonalice legend, tonight’s poster by Alexandra Fischer depicts one of the great cinematic breakthroughs in the history of the tribe. A young woman by the name of Brownie Moonalice – a girl who hated her name so much she wore only pink clothes – created the first Moonalice stop action motion picture. The 3rd Greatest Story Ever Told recreated Hannibal’s assault on Rome on the backs of elephants. Brownie had no budget for actors, so she used Crabs as Carthaginians and their elephants and seagulls as Romans. While the 3rd Greatest Story was a pioneering stop action animation, the combat scenes were a bit hard to follow. 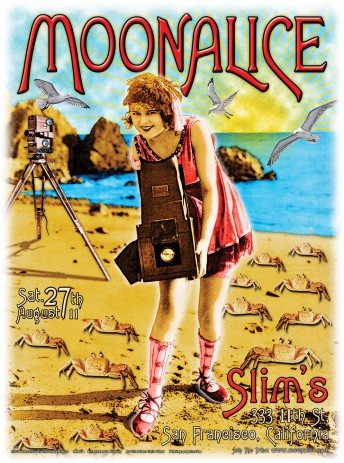