According to Moonalice legend, the music scene in San Francisco has produced many greats who left us too soon. Bill Graham, Jerry Garcia, John Cippolina, and Bread & Roses' own Mimi Farina come to mind. Just two weeks ago we lost another titan of San Francisco music, Warren Hellman. Warren was our friend, partner and mentor. He demonstrated as no one before him ever had that San Francisco has the best free music in the world. A small part of his great legacy is that his crowning achievement, Hardly Strictly Bluegrass, will live on . . . it will probably last longer than any of us, which seems like a good thing. We dedicate this show and this song (Slow Dance) to Warren. It was his song. He was our friend. We miss him.

According to Moonalice legend, tonight’s poster by Alexandra Fischer depicts Pumpernickle Moonalice, the juggling Moonalice who toured under the name “Bread & Roses”. Bread & Roses was a very special Moonalice in that she devoted her career to shows for old folks, hospitals, schools, prisons and other places where people don’t get out much. Given that her act was juggling balls that looked like flowers, that might have been a very good decision.

Shana Morrison sang Angel From Montgomery, And It Stoned Me, Into the Mystic and After Midnight.

2012 started off with a bang, an opening 15 minute "Jokers Lie" shook Slim's and the crowd to their core - Moonalice was home, well rested, fit, cleaned up and ready to rock.
Shanna Morrison joined the party and graced us with her gems.....

Going to be a great year.

Set for the Couch Tour tonight as we are having a dinner party; feeding tonight's show directly into my main system wirelessly through my iPad as i can't use my Airport Express which only utilizes iTunes.... ah love those work-arounds . 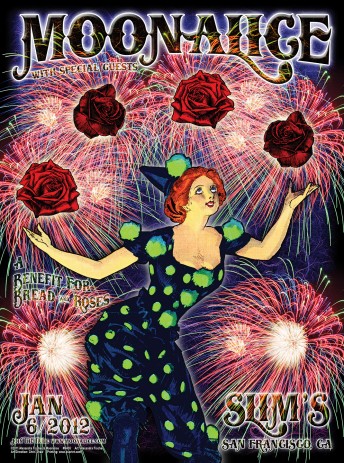