According to Moonalice legend, tonight's poster by John Mavroudis depicts Lucius Merriweather Moonalice, an officer in the Union Army during the War Between the States. On April 19, 1861, the first Union troops arrived here on their way to war. Maryland was part of the Union, but some here took exception. So they rioted. Several Union troops and a half dozen civilians lost their lives. The generals in Washington panicked, but General William Butler snuck his troops into town during the night, dug in on Federal Hill and pacified pointed the city. That pretty much ended the rebellion in Baltimore. History credits Butler's cannons, but that wasn't the real story behind the pacification of Baltimore. I'll give you two hints:

Coincidence? We think not!

Yet another wonderful concert! Mahalo! 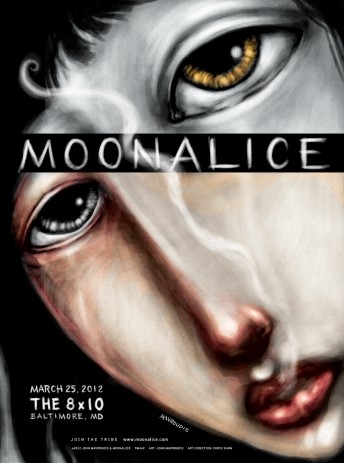