According to Moonalice legend, tonight’s poster by Carolyn Ferris depicts the lovely George Moonalice, a female novelist who took a man’s name to avoid what she perceived as the blatant sexism of the publishing industry. Unlike her predecessors, George Sand and George Eliot, George Moonalice works have been lost to the mists of time. You see, she wrote them on rolling papers. It was only a matter of time before the plot went up in smoke.

According to Moonalice legend, the aforementioned George Moonalice had a scooter named "Rollo" and a crescent moon named "Molo." We have a drummer named Molo, but that's probably just a coincidence. 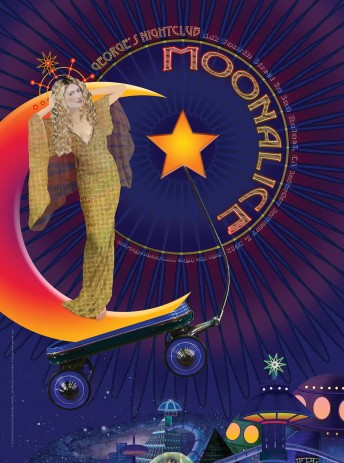