According to Moonalice legend, politicians say the darnedest things. Not so long ago, the head of one of the big political parties mocked his opponents by talking about a War on Caterpillars. In most of the country, this comment produced head scratching, but for those of us here in the Butterfly Capital of the World, them was fightin’ words!! The last time there was a War on Caterpillars, Pacific Grove nearly lost its slogan. Fortunately, PG Moonalice – the lovely matriarch depicted in today’s poster by Lauren Yurkovich – came to the rescue. Known as the Joan of Arc of caterpillars, PG saved the day by convincing politicians to pick on poor people, immigrants and women instead. It’s still too early to know how that is going to out. 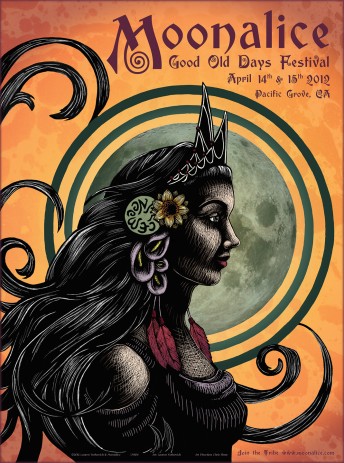