According to Moonalice legend, tonight’s poster by Grace Slick depicts the first Blue Moon after Alice went down the rabbit hole. Somehow Alice and the White Rabbit found themselves sitting on top of the moon itself. As I said, this was the first time Alice went there and the moon had been stuck in a solo orbit for eons. The moon couldn’t help itself and tried to peek up Alice’s skirts. That’s when the White Rabbit started banging on a drum, which brought on a lunar migraine. According to Moonalice legend, this was all the result of the one pill that makes you larger.

Thanks for letting us know. We are checking it out.

The interview video with Grace Slick won't play for some reason:( 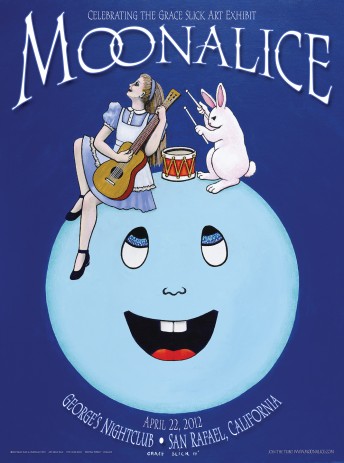