Dublin's Olympia Theatre hosted a unique collection of artists on Friday 21 June, a collective show of goodwill to help with medical costs for Aslan's Christy Dignam who is battling cancer. U2 took part from a studio in New York and the entire show was streamed live in venues around the world. MC for the night was the artist Guggi.

All the performers handpicked their favorite song from the Aslan setlist and stepped into Christy's shoes for one night only. Venues in Dubai, Germany, Czech Republic, Australia, Canada, the UK and across Ireland carried the show live. The full list can be found on www.aslan.ie.

'With the gig selling out in a few hours a lot of fans who have supported the band for years were not able to get tickets.' said Aslan's Billy McGuinness. 'This type of gig will never happen again so its great to give people a chance to see it by streaming it live from the Olympia.' 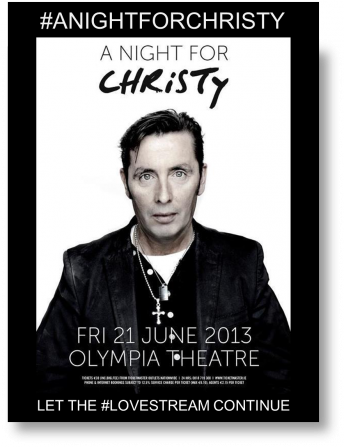