John Molo on the disabled list; Jay Lane on drums!

According to Moonalice legend, today's poster by Darrin Brenner depicts Ford Moonalice, a low rider from the mid-50s that has played a big role in San Francisco history. By an accident of timing - he was born in 1956 - Ford was not around for the 1906 earthquake. As a result, it was not owned by either the great dancer Isadora Duncan or the great cynic Ambrose Bierce, both of whom live here in San Franvisvo. At one time or another, it was owned by Herb Caen's housekeeper, a member of Turk Murphy's jazz band, and the club house manager of Seal's Stadium, who sold it to someone who claimed to know Willie McCovey. No one knows what happened next, but Ford re-emerged in 1965 at the corner of Haight and Ashbury, where he served as an early prototype for Air BnB. Several members of our tribe were conceived in the back seat!

A friendly, soulfull and trippy show with the great Mr Lane on the drum set ...
Great music , great spirit ... Give me so much .
Miss you mr Molo !

Good health to Mr Molo ! We love you ! 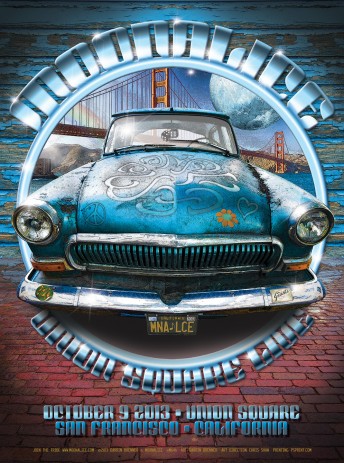