According to Moonalice legend, tonight's poster by Alexandra Fischer depicts Sandra Belle Moonalice and her pet cat, Ollabelle. She is sharing a legend of Woodstock back in the day, when Mahatma Gandhi played what some might consider the very first Midnight Ramble ... in the basement of a barn called Really Big Pink. Dylan had locked his keys in the car with Robbie, so the Mahatma volunteered to play lead guitar and boss everyone around that night. The Mahatma had an approach to music borrowed from Philip Glass. Nothing happened for four hours. The neighbors called the cops to complain that they couldn't hear a thing. There is loose talk that fans want Mahatma Gandhi to play with Justin Bieber next. Sandra Belle has a lot more legends to share, Ollabelle, but she'll save them for another time.

Had a fantastic time! A great show all around. Thanks for everything!!!

Thank you for a terrific night of music...I had a great time....Rock On!!

Fantastic show! Looking forward to attending as many as is possible. Good Luck and Great Times on the Tour!

Just getting home from A Really Kickass Show ,Love Levon's ********

Really Incredible show at our favorite place on the Planet. Had a few personal technical glitches getting started but once we got the rust out of the old HP, the concert came in loud and clear! It is a wonderful time for us, sitting in Vermont, watching the Ramble like we were there. I had to get a second device to see what Barb was tweeting. All around fun. The Dirt Farmer Band awesome to start with and Moon Alice a Great Group...Thanks again, Mary & Fred... 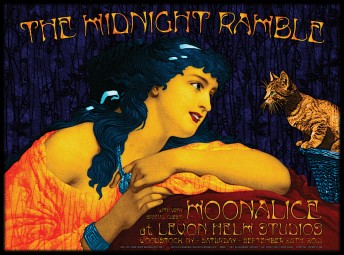