According to Moonalice legend, tonight's poster by Chris Shaw depicts the original cactus jack ... six-pointed suguaro that was the original Arizona version of the children's game. Have you seen one of these before? I thought not. The Arizona game of cactus jacks quickly found a market in Phoenix -- they used the 19th century equivalent of Kickstarter -- but it ultimately got blown out by the non-prickly European game known as knucklebones. It happened so fast, it was as if cactus jacks never existed. But here we are tonight. Living proof that Cactus Jack's lives on.

Great show tonight Moonalice! I can't wait until Oct 8th when I get to see you live again. Won't be making Hardly Strictly Bluegrass
this year. Unfortunately/Fortunately it harvest time! I'll hopefully get to share some with Dopey the Mooneye haha!
Keep on rockin' guys! 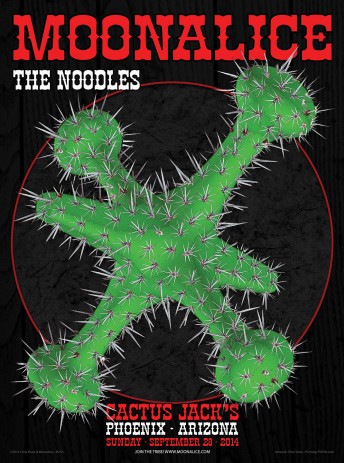