According to Moonalice legend, 2016 has been a nightmare ... it started out with the deaths of Prince, David Bowie and a whole lot of heroes. Then a whole of unarmed black men were killed by police. Then the election season hit high gear and things went from bad to weird to totally insane. Personally, I am suffering from PTSD. Fortunately, relief is available. Let me introduce Princess Eight Squared Moonalice, the goddess of roots, square or otherwise. As depicted in Alexandra Fischer's poster, the princess has a proposition for us! If we vote for Prop 64 next Tuesday, she will make the adult use of marijuana legal in California!!!

Notes:
Lorin Rowan played guitar and sang lead vocal on "Day Tripper"
This show was organized to create awareness and answer questions about Proposition 64 - Adult Use of Marijuana Act.
In addition to Alexandra Fischer's show poster, we gave out a set of 11 posters related to Prop. 64.

Wow! Killer show. I'm very excited to listen again when the audio is uploaded, hopefully without all the skips & gaps that plague the video. 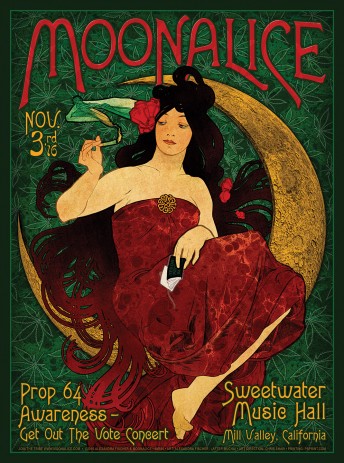