According to Moonalice legend, it has been nearly six months since we last played a gig. We figured it was okay to take some time off, that the Cubs would fall short again and Hillary Clinton would be elected president. Instead the world got weird -- the Cubs won the World Series!!! -- and then went to hell on Election Day. We were so stunned we forgot how to play. Fortunately, we are hippies ... we smoked some weed, pulled ourselves together and here we are. Tonight's poster is by the amazing Stanley Mouse. The character -- Snidely McTweetFace -- is here to deliver lightning bolts of karma to smite bad guys everywhere.

We played this show as a tribute to Steve Harris.

After a six month hiatus, the band and the audience were ready for some serious fun. I have just one request: no more six month vacations, we in the audience can't take it. Highlights of the night include one of the best You, a definitive Nick of Time, and perhaps, top five Joker's Lie. Great way to kick off a Moonalice- Cubensis weekend. 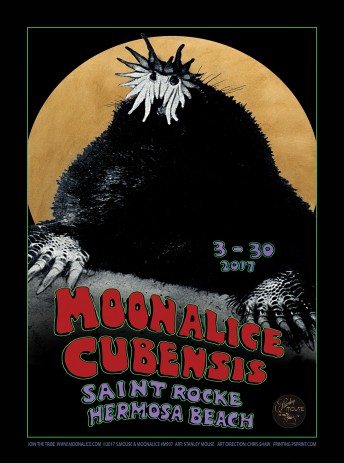