According to Moonalice legend, the squirrels of Union Square are huge fans of Moonalice. We have been playing free concerts in this park for a decade, but did not know this until today. Alexandra Fischer's poster depicts the scene. We arrived for load in and were greeted by a delegation from Squirrel High Command. They brought a gift to express their thanks ... a giant nug of OG Acorn. They gave it to Big Steve, who tested it. The report is in: a nice buzz with a nutty finish. The squirrels also gave us some OG Acorn Butter, which we will try after the show.

Thank you for another great season of Union Square Live concerts. We love playing here and look forward to returning next year! 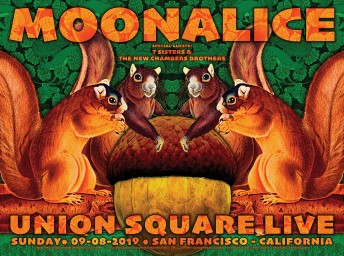