According to Moonalice legend, time has come today. The band is so excited to be touring with the New Chambers Brothers and T Sisters. As depicted in tonight’s poster by Dennis Loren, Grandfather Clock Moonalice, the official timekeeper of the Ohio clan of the Moonalice tribe, notes that time has brought a posse: a raccoon, a butterfly, and owl, and a couple of his cousins. Grandfather want you to know that a dime bag of time still costs only a dime. Buy two and we will throw in a leap year next February. Such a deal!

Notes:
Jason Crosby missed this show so he could appear on The Tonight Show in Jenny Lewis' band. 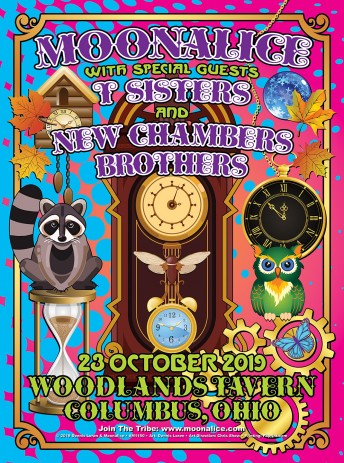