LAUNCH PLAYER
Share
Facebook
Twitter
+
VIDEO COMING
Previous Shows
Find           Show
Next Shows
Martyrs - Chicago, IL
view »
Shank Hall - Milwaukee, WI
view »
DeYoung Museum • Golden Gate Park - San Francisco, CA
view »
The Mobius - Ashland, OR
view »
The Mobius - Ashland, OR
view »
Nectar Lounge - Seattle, WA
view »
The Goodfoot - Portland, OR
view »
Cervantes Masterpiece Ballroom - Denver, CO
view »
Oriental Theater - Denver, CO
view »
Golden Gate Park - San Francisco, CA
view »
VIEW MOST RECENT SHOW »
Nelson Ledges Quarry Park - Garrettsville, OH
view »
Harpers Ferry - Allston, MA
view »
Inter-Media Arts Center - Huntington, NY
view »
Mexicali Blues - Teaneck, NJ
view »
Rams Head - Annapolis, MD
view »
The Fillmore - San Francisco, CA
view »
Wilda Marston Theater - Anchorage, AK
view »
Wilda Marston Theater - Anchorage, AK
view »
The Sitzmark - Girdwood, AK
view »
The Sitzmark - Girdwood, AK
view »
VIEW MOST RECENT SHOW »
The Thirsty Ear IN COLUMBUS, OH
0
I was there
Buy Poster
Legend
Media
Comments
Who Was There?
According to Moonalice legend, the tribe has long encouraged the provision of aid and comfort to creatures with very large heads. We would love this idea no matter what, but really big heads are a Moonalice genetic trait, so we've got to like it as a matter of tribal loyalty. We are reminded of big heads each year during football season, when every college team plays under the control of some critter that looks what you would get if Van Gogh went to Easter Island. When the band arrived in Columbus, home of the #1 Buckeyes, we were greeted by the Mascot-in-Chief of the local football squad. One look at Brutus Buckeye and we understood the greatness of the Ohio State football team. Brutus is so obviously a Moonalice that it isn't funny. But who is Cousin Brutus trying to fool with this Buckeye thing? He's a Hempster from way back. Everybody knows that, don't they? Don't they? 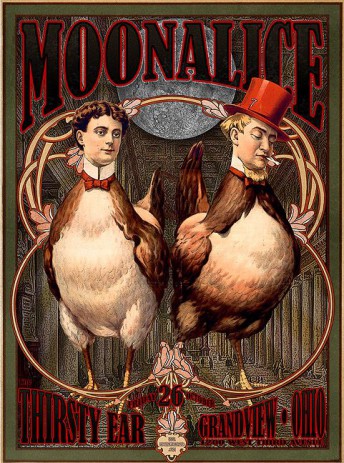