According to Moonalice legend, tonight’s poster by Alexandra Fischer features the lovely True Blue Moonalice, whose rosy red skin belied her name. True Blue dazzled all the boys in the tribe with her stunning good looks and yummy baked goods. Baking at high altitudes is a hassle, but True Blue overcame the odds and the environment with her breakthrough confection: the True Blue Brownie. Unlike the baker herself, True Blue’s brownies actually came in a blue wrapper. Best of all, they could incapacitate a roadie with a single bite. It could be that the Quixote’s True Blue is just a remarkable coincidence. You be the judge.

According to Moonalice legend, on this day in 1915, Typhoid Mary was quarantined. She was the first healthy carrier of typhoid fever ever identified and she was known to have infected 50 people who ate food from her kitchen, 3 of whom died. She was not known for her hemp brownies, which is too bad, as baking good brownies would have been a point in her favor. 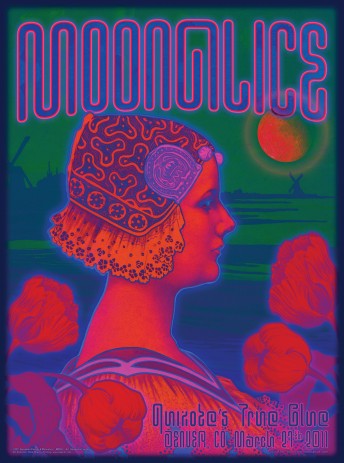