According to Moonalice legend, tonight's poster by Chris Shaw is the first to feature the Dalai Lama. We're very excited about that. It also depicts Queen Elizabeth Moonalice the First as she prepared to return home from the moon, where she had gone some time around the year 1600 to meet the fourth Dalai Lama. Before you ask, let me explain that the rocket ship was built by Tibetan Buddhists to help them transcend space. Everyone knows that gunpowder was invented in Tibet - or China or some place over there - but they also had great weed, which was the key to space travel in those days.

Thanks to band and crew for a real good time. I'd give the show 6 stars, in honor of Nigel Tufnel. 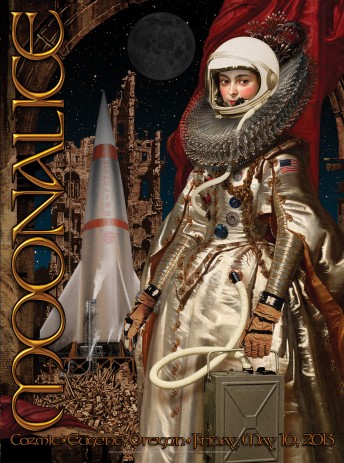