According to Moonalice legend, today's poster by David Singer depicts Quicksilver Moonalice. Quicksilver began her career as an actress ... after being discovered by Walt Disney on the men's room wall of the Apple Pan burger joint, Quicksilver's first and only role was as the Magic Mirror in Snow White and the Seven Dwarfs. She killed in the role, but got carried away by the Hollywood lifestyle. Pretty soon, it was nothing but drugs and sex for Quicksilver. Dopey's weed was the best ... and it had a special effect on Quicksilver. Being a mirror, she couldn't cough ... so she turned bright green ...

Can't wait for the box set I won :)
Rock on MoonAlice

Great jam! thanks for the Sunday Funday Music! 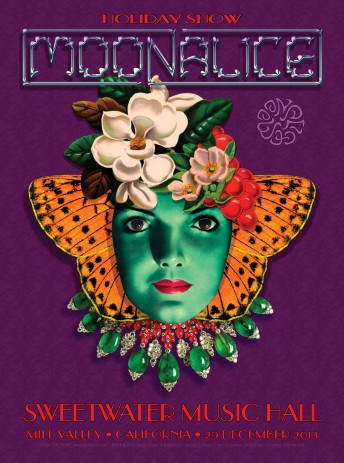