According to Moonalice legend, the ocean off Santa Barbara is filled with oil derricks. At one time, the derricks pumped petroleum, but now they pump something much better: hash oil! WTF?, i hear you ask. Tonight's poster by Darrin Brenner shows how this happened. Years of protest by environmental groups couldn't budge the capitalists, until Saint Barbara Moonalice rode into town on her pet dolphin Flipper and pointed out that an ounce of hash oil is worth more than a barrel of fuel oil. The rest, as they say, is legend.

Another fine show. Stella Blue was amazing. Thanks fellas. 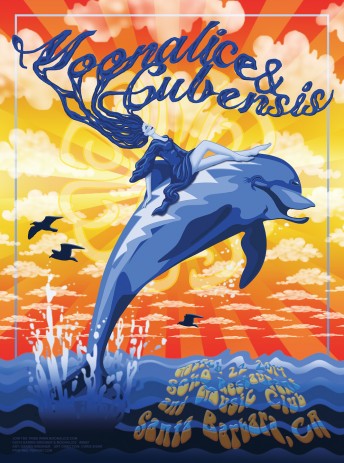